Central - Convenient for Students and Families 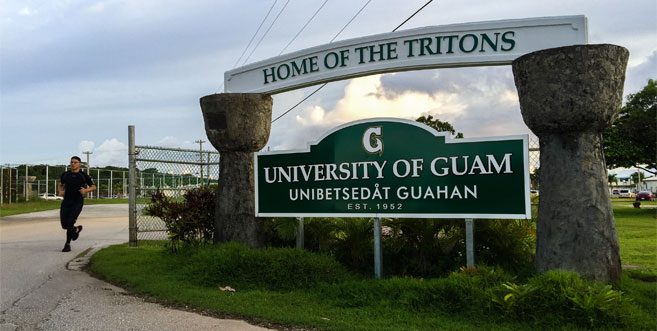 Central - Convenient for Students and Families

The village of Mangilao is located in central Guam. It lies between the villages of Barrigada and Chalan Pago. The village also branches off into subdivisions bordering Dededo and Yigo. These subdivisions include Latte Heights, Latte Plantation, Sunrise Villa, Banyan Heights, and lower and upper Pagat. The village has been called “Guam’s capital of education” because both the University of Guam and the Guam Community College are located there.

BARRIGADA, GUAM: A happening village including one of Guam’s most prestigious neighborhoods, Barrigada Heights

Barrigada is a land-locked village located near the center of the island on Guam's limestone plateau. It stretches from the cliff line overlooking Harmon Industrial Park in the East to Mt. Barrigada in the north. Upscale homes have been developed on Mt. Barrigada along an area known as Barrigada Heights overlooking Tiyan, the interior hills of Guam and the Philippine sea. To the south is the village of Mongmong-Toto-Maite and to the east is the village Mangilao.

In the past, Barrigada was a popular ranching area for people from Hagåtña. Today some parts of the village still have a rural feel attributed to the long winding roads that make their way through hills, valleys, dense vegetation and wetlands. Nevertheless, the village of Barrigada is now a heavily populated residential area bordered by considerable commercial development along routes 8 (Purple Heart Memorial Highway), 10 (Vietnam Veterans Highway) and 16 (US Army Corps Drive). The recently returned former federally-designated land located in Tiyan (formerly the Naval Air Station, Guam) has become the site of some government of Guam offices, private businesses, and residential homes.

Mongmong-Toto-Maite, Guam: (Tri-village known as MTM): Right in the center of everything

Mongmong-Toto-Maite is located in central Guam, just north of the capital city of Hagåtña. Aside from the airplanes flying directly over the tri-village before landing in the neighboring area of Tiyan, many residents of Mongmong-Toto-Maite find it to be a very quiet and peaceful place to live. Maite’scliffline, with beautiful sunset views, is home to some of the island’s most well-known families, including the Calvo’s, whose attractive homes line the cliff above East Hagåtña.

Mongmong and Toto, for the most part, are rural, residential areas. Mongmong runs parallel to Maite and is at the center of the tri-village. It is heavily vegetated and is the most populated of the three villages. Toto borders Barrigada to the north of the other two villages and is known for its winding roads and swamplands.

However, there is also a busy industrial side to the Mongmong-Toto-Maite. The area of Maite and Toto along Route 8 between Tiyan and the island’s capital, Hagåtña is primarily an industrial area, filled with warehouses, hardware and furniture stores, mom-and-pop markets, and many popular bargain shops.

Mongmong’s Catholic Church is Nuestra Senora de Las Aguas (Our Lady of the Waters). Parishioners celebrate their annual fiesta in honor of their patron saint on the last day of January.

The Immaculate Heart of Mary Church in Toto celebrates its patron saint’s fiesta on the second or third Saturday of June each year.