Near Naval Base – Paradise Living 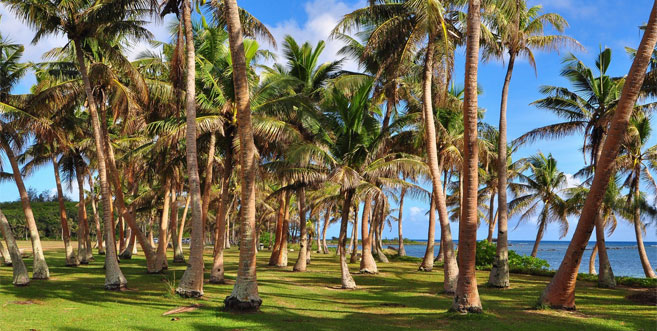 Near Naval Base – Paradise Living”

While many regard Agat as the western gateway to the south, it is also the commercial center of the south. Numerous businesses - from merchants and restaurants to the seventy-room Inn on the Bay - have sprung up in the once-quiet seaside village in the last twenty-five years. Despite Agat's thriving business center, the old heart of the village that includes Our Lady of Mount Carmel Catholic Church, Convent and School, still exists.

The seaside village of Agat lies just south of Naval Base Guam. The village's main road, Route 2, meanders through several commercial and residential areas. The road also leads to a group of public buildings, such as the Agat Community Center and mayor's office and a community library and police station. Farther south, Route 2 runs along the coast of some of the finest beaches on Guam including Nimitz Beach. Nearby is the popular Agat Marina.

The village of Agat is also home to several parks dedicated to the events of World War II. These parks are part of the National Park Service's War in the Pacific National Historical Park.

The Piti coastline is lined by two beach parks: Tepungan Beach Park, with newer pavilions, and the Pedro Santos Memorial Park, with an older, large pavilion and unused basketball court. This area of the coast, known as the Piti Bomb Holes, is a marine preserve, where fishing is now prohibited. This prohibition has resulted in an abundance of fish and other sea life that make the Piti waters popular among divers and snorkelers.

Slightly further south, across the road from the ocean, is the New J-Market grocery store and a gas station, just before the Piti Power Plant at the junction of Marine Corps Drive and Route 11, which leads out into Cabras Island. Cabras Island extends into the ocean to form part of Apra Harbor and is further extended by the Glass Breakwater, named after U.S. Navy Captain Henry Glass. On this island is the Cabras Power Plant, the Port Authority of Guam and the Commercial Port. Further out is Family Beach, a secluded recreational spot.

The village proper is located just across from Cabras Island, on the cliffside of Marine Corps Drive. The village is a small residential area with curved two-lane roads and a scattering of homes, many of which date back to the decade after World War II. The village’s most prominent features are Our Lady of the Assumption Catholic Church and the Mike S. Tajalle Baseball Field. The mayor’s office is in a small house-like structure, and the old senior citizen’s center is now being used as a youth center.

The district of Asan-Maina encompasses a large area, including the main coastal village of Asan, the community of Maina nestled in a valley between Nimitz Hill and Agana Heights, and most of Nimitz Hill (also known as Libugon) and land beyond it further inland.

The main village of Asan was redeveloped in the 1980s by the Guam Housing and Urban Renewal Authority (GHURA). The redevelopment changed the village's look from its more traditional Spanish flavor to a fairly modern-looking suburban appearance. The streets were straightened, sidewalks were added and the houses are nearly all concrete with many two-stories high. GHURA still owns many of the houses in the main village, houses that were all built exactly alike, and even painted the same color. Space was limited by the ocean to the west and the hills to the east, which necessitated the two-story structures and small yards.

The village sits partly on the hillside of Nimitz Hill and partly on the flat land below it, just in front of the sea. Many of the houses are built on steep roads going up the hillside, reminiscent of San Francisco. The Catholic church, Niño Perdido Y Sagrada Familia (Holy Family), sits at the center of the village, along with the community center and mayor's office.

Maina rests in a valley of lush vegetation, bamboo groves and colorful flowers that come right up to the houses and the main road. The small community is spread out along one small, winding main road, one end of which meets the road going up Nimitz Hill and twists its way to the backside of Agana Heights.